Citrus bioflavonoids are phytochemicals belonging to the polyphenol family. These phytochemicals are found in citrus fruits and are responsible for important functions: from protection against insects, bacteria and other microorganisms to stressful situations for the plant, such as temperature, drought or ultraviolet rays.

Citrus bioflavonoids have shown numerous beneficial properties for human and animal health, and their functions as natural antioxidants and anti-inflammatories have been widely described. Recently, numerous studies are showing important beneficial effects of these molecules on the health and welfare of production animals, both in monogastrics and ruminants. For example as an alternative to zinc oxide to combat diarrhoea in weaning piglets.

Mortality: a problem in the modern broiler

The genetic selection carried out over the last 60 years in broiler chickens has meant a great progress in the productivity of these animals, mainly in terms of growth and productive efficiency, as well as a significant reduction in their age at slaughter. This spectacular improvement in terms of production has also had a collateral effect on the development and relative growth of organs, leading to the appearance of different health problems and negatively affecting the welfare of the animals.

There has been an increased incidence of cardiovascular diseases, leading to sudden death and ascites, together with an increased occurrence of leg problems and skeletal deformities. In both cases, both cardiovascular and locomotor problems are associated with welfare problems, but also with increased mortality in chickens.

The intestine, an organ whose main function is the absorption of nutrients, but which is also involved in numerous metabolic and endocrine functions, and closely related to the immune system, has not been unaffected by this evolution. Although genetic selection has made it possible to increase the total weight of the intestine, its relative weight in relation to the animal’s body weight has decreased.

At the same time, the nutrition of these animals has also advanced to allow for rapid and efficient growth. Thus, the energy content of diets has increased, with carbohydrates and fats being the main sources of energy. The excess of these nutrients, fats and carbohydrates, has recently been linked to chronic inflammation in the chicken intestine promoting other intestinal and systemic pathologies.

Thus, we now find that a great genetic improvement in growth rate and productivity in these animals have been associated with welfare problems and increased mortality in late stages.

The antioxidant and anti-inflammatory properties of citrus bioflavonoids have been extensively studied and described. These molecules are capable of directly eliminating and inhibiting the production of free radicals in different tissues. On the other hand, they inhibit the activity of oxidative enzymes such as oxidases, and increase the activity of antioxidant enzymes such as superoxide dismutase, catalases and glutathione peroxidase. In this way, citrus bioflavonoids act in the early stages of inflammation by reducing the oxidative stress that causes activation of the immune system.

On the other hand, these molecules act as potent anti-inflammatories, reducing the release of pro-inflammatory cytokines and the infiltration of tissues by immune system cells, thus acting as immunomodulators.

Supplementation with citrus bioflavonoids in broiler chickens has shown positive effects on animal health, productivity and efficiency, as well as on intestinal microflora.

In different studies, the addition of citrus bioflavonoids to the feed has favoured the growth of beneficial intestinal flora in broiler chickens, such as lactobacilli (Figure 1), which are related to a healthy intestinal microbiota and the reduction of pathogenic microorganisms.

Figure 1. Lactobacillus spp. in broiler chickens supplemented with antibiotic growth promoters (Bacitracin) or citrus bioflavonoids versus a negative control throughout the production cycle. 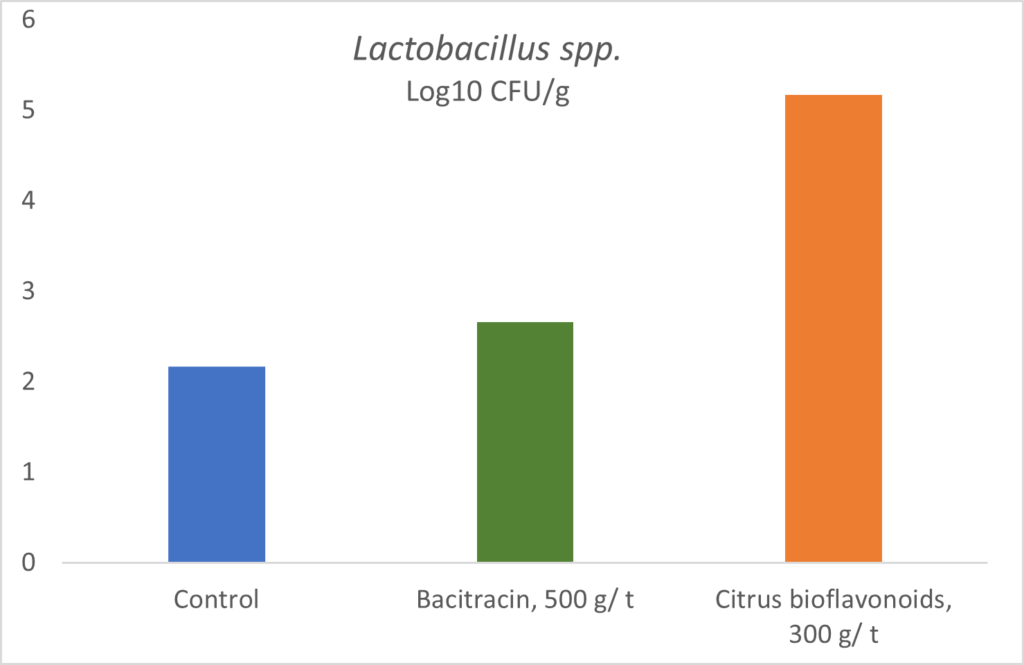 In different studies, the addition of these bioflavonoids to the feed has resulted in a reduction in mortality, either compared to a negative control (Figure 2) or to a group of animals treated with antibiotic growth promoters (Figure 3). In both cases, animals supplemented with citrus bioflavonoids showed a significant reduction in mortality at the end of fattening.

Figure 2. Mortality in broiler chickens supplemented with citrus bioflavonoids throughout the production cycle versus a negative control. 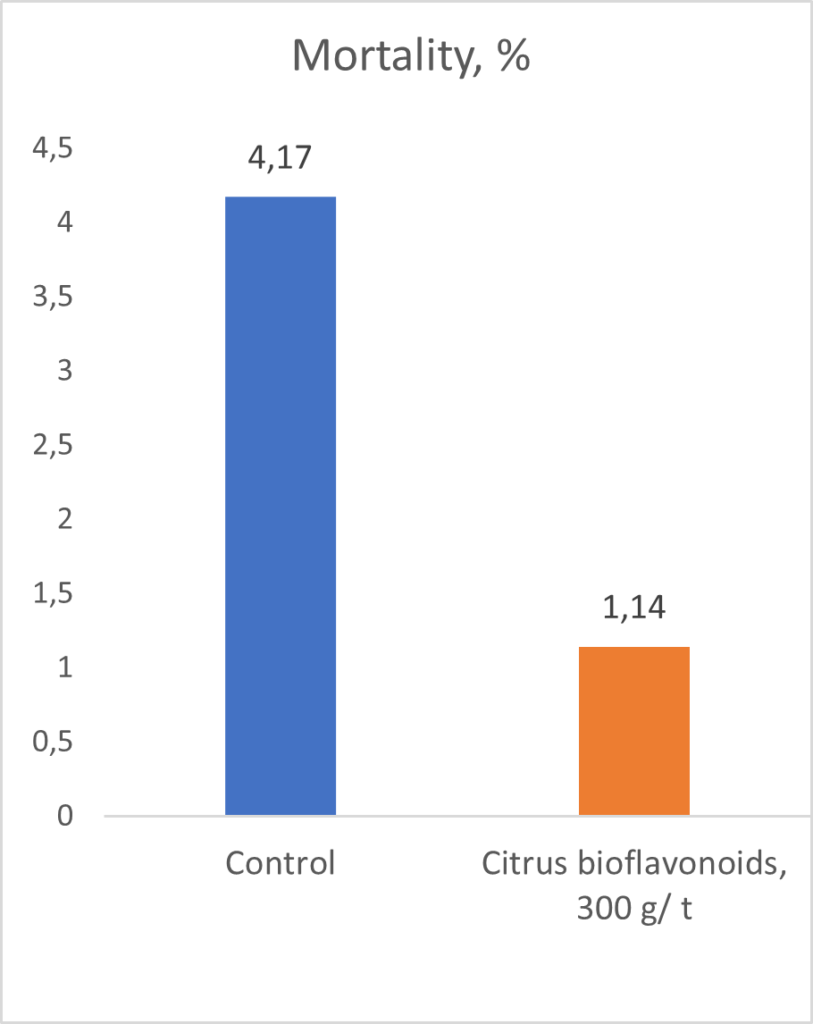 Feed supplementation with citrus bioflavonoids in broiler chickens is an effective alternative for reducing the use of antibiotics. These molecules improve animal health and reduce mortality, while promoting a healthy gut microbiota.