Citrus bioflavonoids: the alternative to zinc oxide to prevent diarrhoea in weaning piglets 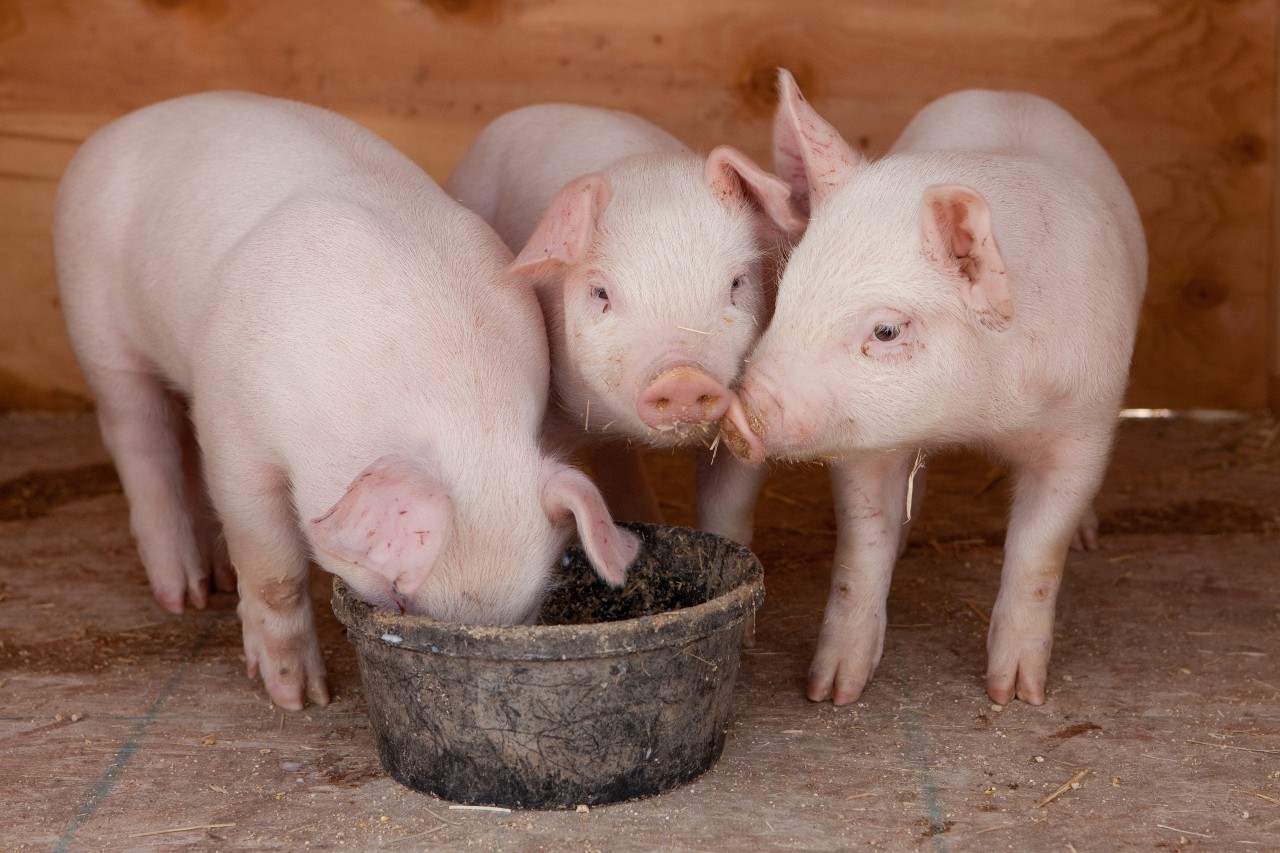 Diarrhoea in weaning piglets, a challenge

Today piglet weaning remains a critical point in pig production. Weaning in intensive pig production systems occurs at an age when the piglet is physiologically immature, both digestively and immunologically. Thus, the separation from the mother, the introduction to a new environment and the disappearance of mother’s milk from the piglet’s diet, entail a stress that in itself favours the appearance of pathological processes, especially digestive but also systemic.

The effects of stress on the digestive system itself, the immaturity of the latter, together with the anorexia linked to all these changes, have devastating effects on the epithelium and the integrity of the intestinal barrier, favouring the appearance of diarrhoea in piglets.

The prohibition of zinc oxide as a premixture in piglet feed

Due to its antimicrobial effects, zinc oxide at pharmacological doses has been used prophylactically to prevent diarrhoea in weaning.

But the use of zinc oxide also has other side effects, such as environmental pollution and the promotion of antibiotic resistance in bacteria, which have led the EU to ban its use at pharmacological doses from June 2022 in animal production.

With the prohibition of the use of zinc oxide at pharmacological doses, it is necessary to adapt feed formulations (protein content, synthetic amino acids, highly digestible ingredients, etc.). Sometimes this is not enough, and an alternative to zinc oxide is required to help improve animal health at this stage. There are different proposals on the market, such as organic acids and fatty acids, together with phytogenics including citrus bioflavonoids.

Citrus bioflavonoids are plant-derived molecules belonging to the polyphenol family. The natural extract of Citrus aurantium has a high content of glycosylated flavonoids, molecules whose chemical structure makes them ideal for use in improving animal health.

These molecules act as potent antioxidants, anti-inflammatories and immunomodulators, promoting epithelial health and thus the integrity of the intestinal barrier, improving digestion and nutrient absorption. Moreover, they positively affect the gut microbiota thanks to their antimicrobial effects on pathogenic microorganisms, favouring the growth of beneficial microbiota, such as bacteria belonging to the Lactobacillae family.

A total of 252 piglets, male and female, were randomly distributed according to their initial live body weight (BW0) in 18 pens (14 piglets/pen), and 3 treatments (6 pens/treatment) were applied on the same basal diet (BD):

ZnO: treatment with veterinary prescription before 01/2018

Bioflavex: treatment with veterinary prescription after 01/2018

Animals were weighed individually at weaning (day 0) and on 7, 14 and 35 post-weaning days, and feed intake at each stage was recorded for calculation of production parameters. 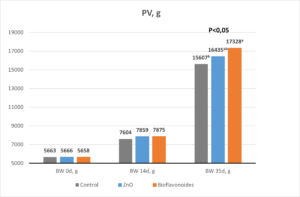 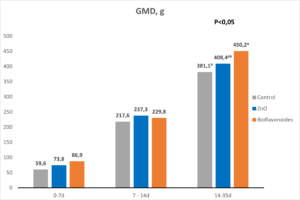 Piglets supplemented with citrus bioflavonoids as an alternative to zinc oxide showed a higher average daily gain (ADG, g) than the other two treatments (P<0.05) during the starter phase (Figure 2). 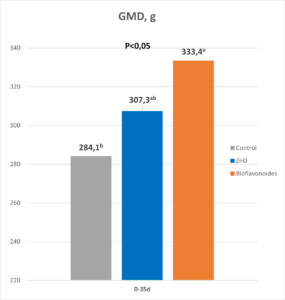 The ADG was higher for piglets fed citrus bioflavonoids compared to the control at the end of the study (P<0.05), while piglets supplemented with zinc oxide showed an intermediate ADG (Figure 3). 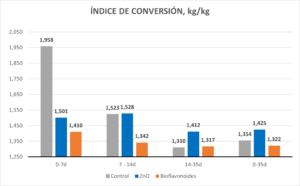 Although there were no statistical differences between treatments in conversion rate (CR, kg/kg), animals supplemented with citrus bioflavonoids were numerically more efficient than the other treatments (Figure 4).

Supplementation with citrus bioflavonoids is an effective alternative to zinc oxide in piglets at weaning, improving the productive performance of the animals.